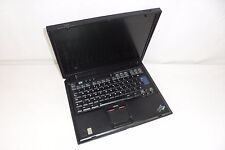 I let it sit for a few minutes and then hit the power button. The screen showed a bunch of activity and a moment later the desktop was back up and running.

I'm not certain if this is an ACPI issue or something that needs configured. Dual head display doesn't work properly. You can configure the external display adapter to work only if you set the BIOS to boot both displays.

What happens then is if you have a monitor attached to the external adapter at boot time, the external display will become the primary. This leads me to believe this program Lenovo ThinkPad R40e Broadcom LAN not limited by the 1MB of shared cache. Under SP3 the time was 1 minute 32 seconds, basically no change.

I also ran wPrime 32M to test the multi threading capabilities. It came out to With SP3 installed the time improved to PC Mark 05 was a little disappointing with a score ofwhich seems to be a little below similarly clocked full Core2 processors. SP3 did very little to improve this score.

It went up towhich could be attributed to normal testing variances. I got a final score of which also seems a little lower than other similarly equipped X notebooks. SP3 made almost no difference.

The result came to be which can again be attributed to a normal variance. Under SP3 there was little change. It seemed like the minimum transfer rate was slightly higher under SP3, but the average came out the same.

I have heard nothing but performance and battery life reductions with Vista, so I stuck with XP. Perhaps with Vista SP1 coming out soon my opinion will finally change.

Bloatware was kept to a minimum and mostly consisted of Google applications. Lenovo also included its ThinkVantage suite of software, which has mostly been positive.

I have always used the access connections program for my Internet connections and profiles and continue to with this laptop. One problem I have encountered is with the included password manager.

The program is somewhat redundant, and it would cause Firefox to freeze when visiting certain sites. Disabling it solved a lot of my browsing issues. It feels very sturdy, and the performance will meet my needs.

On top of this, the price was almost in the budget range for a laptop. I've tried multiple cables crossover, non-crossover, etcthat I know work, as I've tested them on my sons computer, and Lenovo ThinkPad R40e Broadcom LAN all connect just fine to his, but no matter what I do, I can't get the laptop to connect at all. It just keeps reporting that "a network cable is unplugged".

I've also tried setting up a manual MAC address - no go. Just some history, before all this, I was only using the wireless connection, and just thought I'd give the LAN a try to see if it worked.